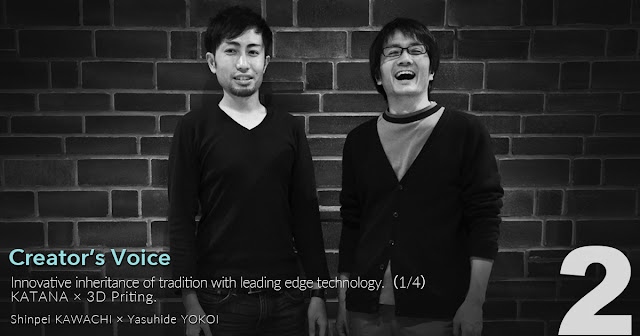 Cut a new way by Japanese original artisan technique and global mindset. There is a stunning company which undertakes anything related to art from traditional handicrafts to digital technique developments. The name of the company is “Studio Shikumi". The project exhibition organized by traditional craftsmen and knowledgeable people is going to be held in Omotesando from Nov.16th. And what Studio Shikumi is handling is “Japanese sword”. The works is not only for conceptual exhibition but for sale.


By a chance, our company Kabuku covered the design of the sword case with 3D printer in this project. This time, we heard about episode and a future plan from the project proposer Shimpei Kawachi, Studio Shikumi CEO and Yasuhide Yokoi, an industrial designer of Rinkak team.

ー Rinkak has been engaged in a research and development of traditional crafts with 3D printer such as mOment KUMO. Then, studio Shikumi asked us to join this long-term project ‘ORIGAMI’ which puts emphasis on the revolution of traditional crafts and fortunately, this joint development was realized. Could you tell me about the reason why you started this ORIGAMI project?


Shimpei Kawachi (S): I started this project to preserve the traditional crafts techniques. Besides supporting the life of artisans, our concept of “the technique preservation” means, primarily, to hand down the works as cultural assets. As long as cultural assets are kept alive, later artisans or technique holders can revive the technique, even if it ceases. Thus, we begun this project for preserving the product itself. 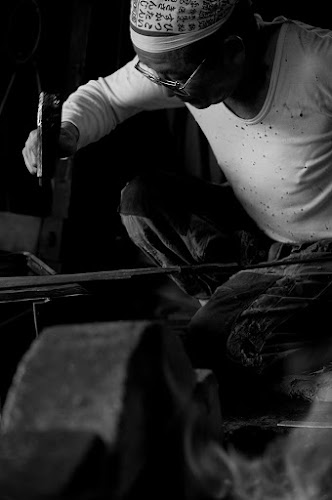 Kunihira Kawachi, father of Shimpei Kawachi crafted the sword.
He is the only artisan who could reproduce "Utsuri", a distinct swerving line down the center of the sword, which had been presumed impossible to recreate after Heian to Kamakura era.

S: The reason why contemporary writers and blacksmiths cannot make ends meet is that their works are considered to be useless and too expensive considering they are no demand in the market price. This realistic perception prevents consumers from buying them. However, the quality of the product is ‘origami tsuki’( means ‘a quality of the product is guaranteed’). By the way, the project name “Origami” came from not the action of folding papers, but the history that Kouetsu(*1) decided to judge the sword’s ranks and attached the letters with words written ‘this sword is splendid’ or ‘this is not good.’ It was a written statement of expert opinion. And this statement was called “origami tsuki”(means origami is attached.)


ー That’s why it is called ‘origami tsuki.’....then, ORIGAMI PROJECT

S: Haha, right on. The Japanese expression “he/she is origami tsuki, so that you can trust him/her” also came from here.

Yasuhide Yokoi (Y): Where was the letter put?


ー It is really interesting that daily Japanese expression came from the action showing the value of Japanese swords.

S: Our ORIGAMI PROJECT is something to add a new value into products such as contemporary swords and lacquered traditional industrial arts.

Y & Every staff: Now I know about ORIGAMI! (Though we have worked for a long time…)


(*1) Kouetsu Honnami: The man of good judgment about traditional arts. His talent was not limited to sword judgement, and was active as a craftsman, calligrapher, artist in the early Edo era. Also, he was one of the originator of Rin party.


(*2)Honnami family: The prestigious family in Kyoto whose work was to grind and care swords from Kamakura to Northern and Southern Dynasties era. They had the highest authority in sword judgment field.


The next page is"Meaning of Selling Japanese Swords"