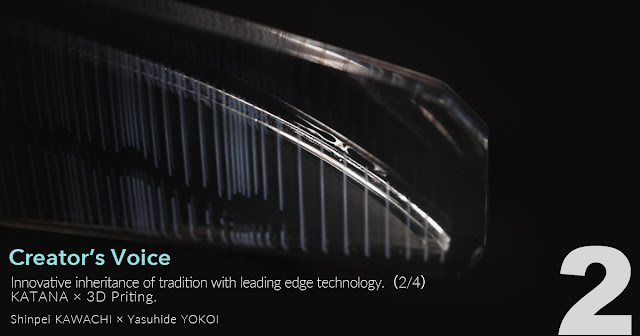 
- How are going to make a breakthorugh?

S: We target foreign consumers. Therefore, we put larger emphasis on appearance in order to give the Japanese impression to consumers from the items, for example, by using the logo of a crane.

Y: It is true that Origami has already become a global word.


- What is the origin of these trials?

S: I was originally born in a Japanese sword artisan family(※3) and I grew up seeing apprentices leave and be independent. Then, as I mentioned before, some of them had a hard time financially. I directly faced the fact that despite more than ten-years training and possession of their own studios, they could not keep working for making swords. This family-based environment encouraged me to go to crafts course in Tokyo University of the Arts.

What I felt on the process to create works is that it is difficult to break down entire sense of blockade in the world based on traditional craft. Regarding the field of crafts where I studied, some are working for traditional crafts world, and others are active in the contemporary art field. Though there are some artists who are engaged in the jewelry category in order to match today’s market needs, it seems to be tough to recreate the new value in traditional world.

S: When I tried completely new expressions or materials, I was sometimes told, “That kind of expression does not fit traditional crafts.” 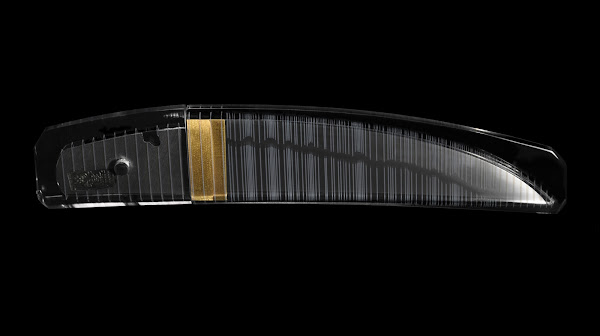 -As is often the case.

S: I wonder what kind of expression is important in order to preserve the traditions, so one time I tried creating a scabbard by myself. I am thinking of the necessity of considering the market needs, and now I can finally see a sign of progression in the project.


- Is it in your college days when you started thinking of realizing your trial as a business?

S: No. It was after my graduation from a graduate school. I had worked as a research worker in the Tokyo National Museum for three years. Bereaved families of baby-boom generation whose fathers passed away came there. They said that they discovered cultural assets from the left articles and would like to preserve them. However, because those products do not have values today, I had to reject their requests against my will.


S: It was truly regrettable for me. Though the values of the articles as memory are as much as national treasures for the families, the articles cannot be accepted in the present time, because they have no market values. Then, what happens to them is get discarded and dissapear from the world.

Y: What? Are they thrown away!?

S: Most of them cannot be helped..I discarded some hanging scrolls and the first on the list of discarded cultural assets is Japanese swords. Though some of them can be overlooked, many of them are sent to auctions and carried away to various places. These facts were all painful for me.

Through the interaction with visitors, I came to think that there might be a demand to manage and preserve individual cultural assets regardless of today’s market values.


- Then, you wanted to be independent.

S: Right. I exhibited and sold cultural assets given with approval. When they were in demand, I intermediated between families and customers by showing their value. I had dedicated this work for three years and I found that swords are also in demand and especially by foreigners.

Y: I know what you mean. Changing the subject, Rinkak exists as a platform of digital fabrication and I think its policy is a bit similar to that. In fact, it is only creators and purchasers who can decide the value of commodities. What we do is to be a platform for anything, ready to output and sell them anytime.

- As far as there is a data, the range of reproduction can widen as technology progresses. This is one of our expectations.

- Especially, as soon as you cross the ocean, value paradigm shift can easily happen. It happens to not only works of art, but anything needed to be tackled with nonlinguistic ways.

S: When I talk with sword merchandisers, they often say that Japanese swords are useful when they meet foreign VIPs, especially for governors and politicians. They are really pleased when they are given Japanese swords as souveniors. Even if the price was from 5 hundred thousand to 10 hundred thousand yen, the values of swords are enough to delight the VIPs. Anyway, it is impolite if you cannot talk about your own culture to foreign VIPs, so there are various merits of giving this kind of suveniors so that you can share the knowledge related especially in diplomatic situation.

S: Yeah, so far I guess so. It’s because this practice is based on my father’s connection. So now when it comes to sales of Japanese swords, I can say it is working out not only domestically but globally.

(※3)
Kawachi Shimpei: The forth son of Kawachi Kunihira, the 15th Kawachinokami Kunisuke who was a blacksmith in Yoshino in Nara. He grew up in the environment surrounded by many artisans and apprentices.


The next page is“The Sword’s Value in a Context”