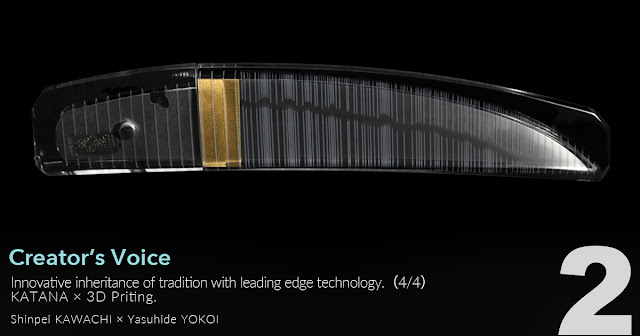 
S: It is quite important for Japanese swords not to be pulled out.

S: At the Edo, Muromachi, and Northern and Southern Dynasties period, it was truly important to smooth things over with discussion and without swords. Giving the example of Kanbei Kuroda again, without weapons he managed to work out problems by not killing people and letting people alive. Japanese swords were carried along as one of the samurai spirits. It was their philosophy that they carry Japanese swords with them, but never use them.

Before entering a tea room, you need to place a Japanese sword on a sword rack. The nijiriguchi (a small door which leads into a tea ceremony room) is designed so that you cannot enter the room with your sword. They put the great importance on owning it, but not using it. Thus, when they had a discussion, they did not use it nor bring it.

Y: It was like a tacit communication tool. Besides peaceful negotiation, on some occasion, it might have had the meaning of a threat to others not to pull out the sword.


S: If you hold a Japanese sword, you will realize its weight.You might have an feeling that you can cut, even if you just swing it down loosely.

S: What the difference between a gun and a sword is that you can shoot a gun from 20 - 30m away, while with a sword, you need to walk up to an opponent and kill him/her in your territory. Also in the case of a sword the opponent cannot be killed instantly. You must see the person you killed suffering extremely and bleeding until he/she falls down. Considering that one must face that oppressive situation in killing a person, I predict that samurais in whatever era, had never used a sword except the very end. Thus, I think that for samurais, a sword was not a weapon, but an emotional mainstay to control themselves.

I tell people who own a sword or are going to own one that I would be happy if you mend and ornament a sword which has been handed down from ancestors and think about the fact. I think a sword is like a time machine. Because a weight of a sword will hardly change, if you hold a sword used by Hideyoshi, you can feel as the same weight as Hideyoshi did.

-It means that you can share an experience through a sword. Well, you can hardly experience holding Hideyoshi’s sword... haha.


S: Haha, appreciate a sword as a one of the time machines. Our attitude is that we display and sell swords in order to let people think about peace. By the way, the other day I went to Ahmadabad in India to give a lecture. Because it is the place where Gandhi was born and acted, people there really respected the principle of nonviolence. Then, when I talked about this project, they said to me, “We are the same as you, having that kind of philosophy.” and, “Japan is great!” I felt we could share the same philosophy. 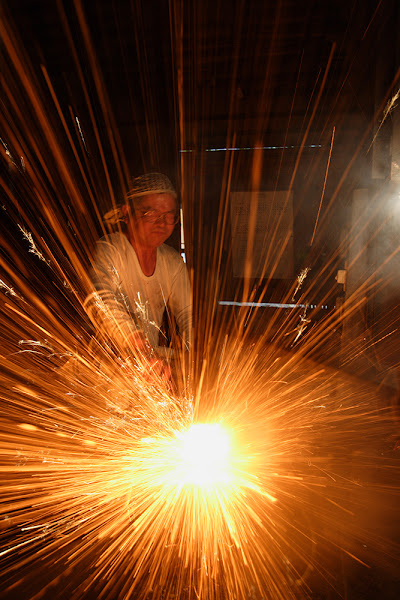 -Mr. Yokoi, what did you feel when you were asked about the design of a sword case?

Y: To tell the truth, I thought it was a difficult motif and theme. It is too unfamiliar with me to have had a basic knowledge about it, so I needed to gain a lot of manners, histories, and rules related to a Japanese sword which is a strong historical icon. In addition, my recognition of it was a powerful weapon at the beginning.

-It is true that at first, you seemed to try to understand the project cautiously and carefully, when you got this request.

Y: Rather, it came to be the motivation of the design. Because I have worked with Mr. Kawachi in other project, we could understand each other quickly. Also, because of that, it was relatively easy for me to understand what he was seeking to novelty or age in the early stage. In that respect, the project worked out really well.


- After that, the project went well, didn’t it?

Y: Yes, I thought I really would like to try this project because of Mr. Kawachi. First of all, because he himself have an experience of manufacturing, I thought I could give any of my request about a design to Mr. Kawachi, haha!

Y: Additionally, I really felt the expectation of creating something whole new from him…
And more than anything, it was the best opportunity to try new technology!


- So, you thought you could respond to Mr. Kawachi’s expectation. Haha

Y: Yeah, I think if Mr. Kawachi was a stubborn authority in a sword field, I may have been crushed by pressure.

-How many people engaged in the process to create a sword?

S: It may be 6 or 7 people. The process begins with an artisan who creates ‘Hamatagane’, a steel made from iron sand or black sand, then a black smith and artisan create ‘Habaki,’ a skirting board, and a knife grinder grinds it. After that, a person designs a case of a sword, and creates it.
It takes about two months to create a short sword.

Y: In the side of 3D printer, there are a supervisor who checks the whole manufacturing process, operators who adjust datas, and person who eliminates support materials and polishes it. Totally, it might be 3 or 4 people.

-Which point was the toughest for you?

Y: We are still working for solving the problem of clearance. The traditional sword case was made of wood so that it fits a sword smoothly. It is because woods absorb the pressure with their elasticity and like make an edge adhere it. However, our material this time is acrylic resin.
It needs accurate calculations. Also, a printer has a characteristic. Thus, I really appreciated SWANY CO., LTD which made great efforts for detail orders and high quality.


-I heard that the machine used for printing was stunning.

Y: The 3D printer we used this time is the newest model named ‘Stratasys Objet500 Connex3.’ Thanks to this, we can make it as if lines are floating in the air and put colors to just that portion. For the final process, I asked professionals to polish it to the quality of a glass. Then, a super clear sword case was realized!

S: My father and other artisans were really excited, when I showed the picture of the trial product! They said ‘We could not wait to see the product in real!”