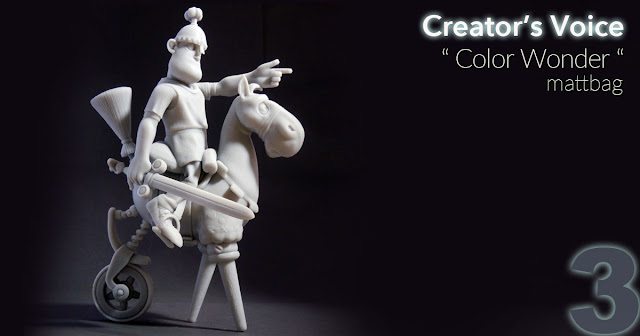 Whenever those characters are placed in hand, the shadow more than a pen tablet can make is shown. Like how light hormonizes with shadow on paintings, life and shadow also reflect the vital force of characters by a perfect coordination between light and shadown in every minutes and seconds. Mattbag fully experiences how charming the 3D printing technology is by generating his creative characters out of the laptop. As a character producer of Sony Computer Entertainment Europe, Mattbag focuses on design toward 3D printing technology. We talked about how he started his 3D design and what he always keeps in mind; he said that apart from the proportion or style, what he cares most is balance and material volumes.

Q: What do you do usually?

I am a Principal Artist working for Guerrilla Games, a division of Sony Computer Entertainment Europe. My work varies a lot, as a 3D generalist I have worked as a character artist, animator and most recently environment lead. We recently finished working on DLC levels for Killzone Shadow fall on the PS4 and are now working on an exciting new, as yet unannounced game. Outside of work, I enjoy to making characters and animations of my own, including characters that I 3D print. 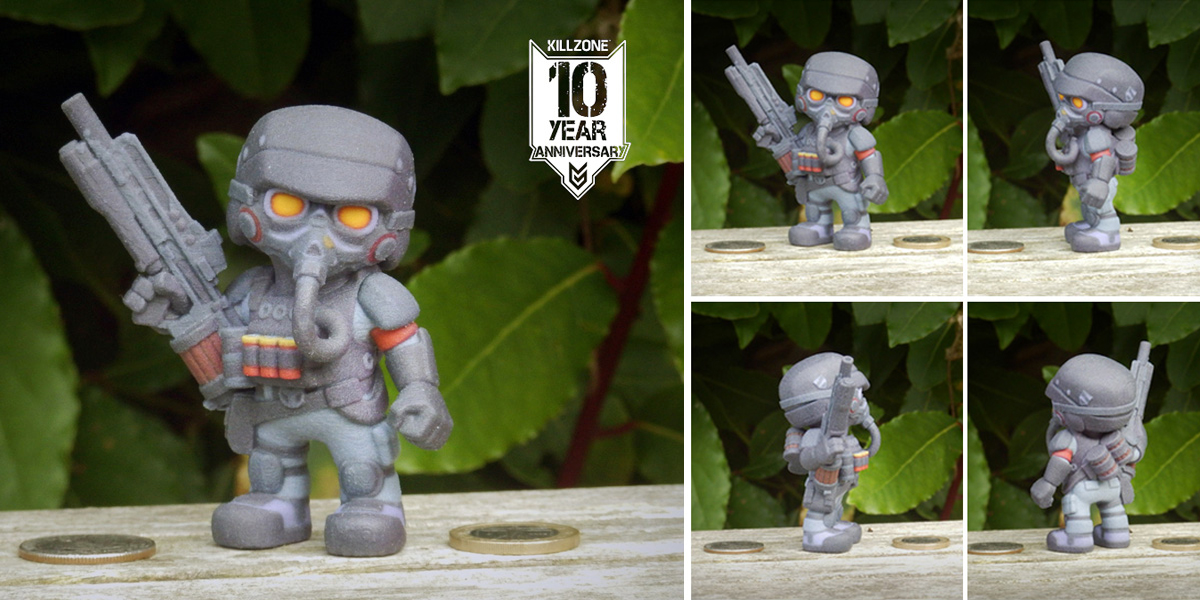 Q: When did you originally start creative activities, apart from 3D printing?

As far back as I can remember I’ve always been drawing or making something, from crayons and modeling clay as a child to acrylic painting or animating armatures when I was a teenager. Eventually I was lucky enough to study traditional animation in Bournemouth, which leads to my first real job working with the legendary Ian Livingstone on his game ‘Deathtrap Dungeon’ which came out on PC and the first PlayStation.

Q: What made you move into creative field?

I think I’ve always been driven by what I see around me- I love animation movies and anything with moppets; I’ve always been fascinated with toys, trinkets and stuffs around us that aren’t just functional but make you think or want to play. I’ve always wanted to and still want to make those stuffs. 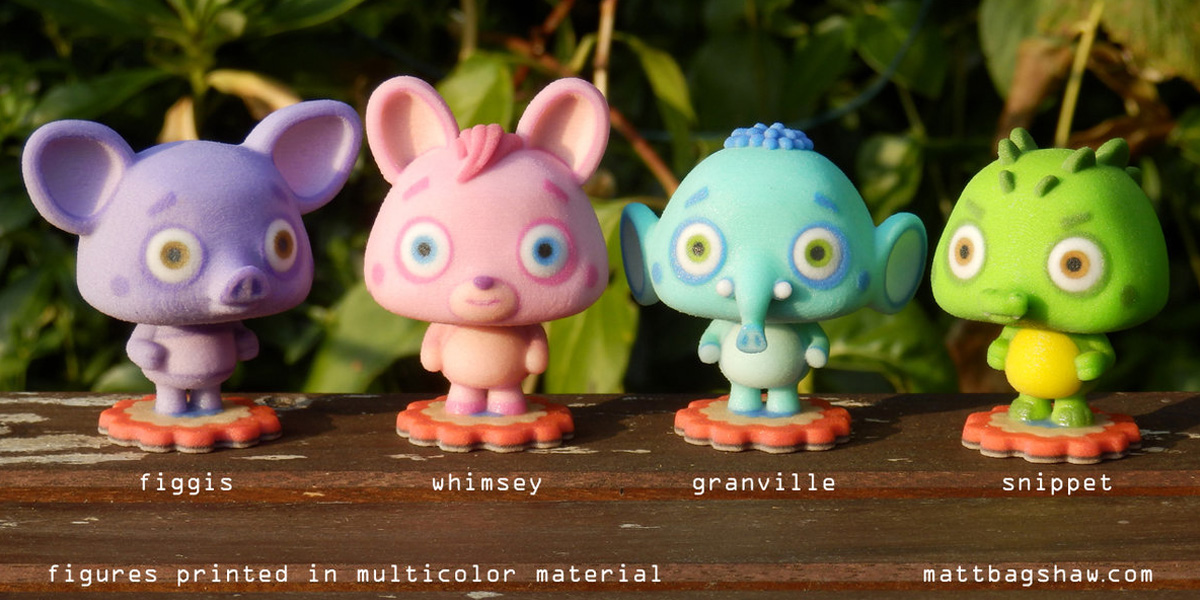 Q: When you create something, what do you keep in mind?

It’s a good question. Apart from thoughts about proportion or style you also need to consider balance and material volumes: Will this need a base? Can I hollow it out? What size should the final model be? I try to keep production costs down while maintaining the integrity of the model, being able to add a couple of discreet material drain holes can considerably reduce the cost of production, as can making it just a cm or two smaller. I want people to get value for money if they choose to invest their hard earned money in one of my models.


Q: From where do you obtain inspiration to get idea?

I’ve always got so many things rattling around in my head that it usually takes an outside event to jolt one out, for example my Weird Little Guys came from character I designed for a TV ident competition, I just had this crazy little top heavy creature running around a tree and I didn’t get anywhere in the competition, but I’d grown attached to the little guy and decided it would be fun to convert the animated model for 3d print.

I liked the result and that made me wonder if I could make some other creatures in the same simple style. I got my girlfriend’s nieces to suggest their favorite animals then my challenge was to keep them as close in form to the original, but recognizable to the girls as the animals they had chosen. It was fun and of course they got to keep a print of their inventions when we were done. Alternatively in the case of the cats, I was simply doodling while watching a TV show about the Internet meme ‘Grumpy Cat’ I drew a few sketches that made me chuckle and 2 weeks later they were sitting on my shelf. 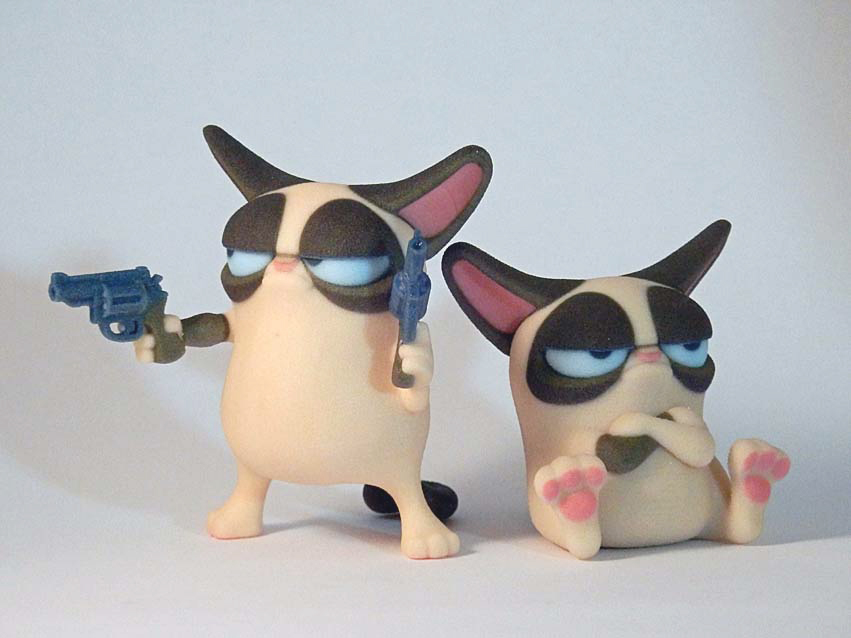 
Q: What made you start using a 3D printer?

A few years ago I was playing around with a Photogrammetry package that had just come out, as I’m sure you know this is where you produce a 3D scan using just a camera to take lots of photos of something which are then stitched together by software to make a 3D object. After trying out a few things I got a pretty decent 3D head scan- I couldn’t help thinking how cool it would be if I were to make good base for it and somehow print it out, but other things distracted me and I forgot about it. Then about 2 years ago I stumbled across an article about advances in 3D printing; it was really interesting. Then, after a bit more research I discovered there was such a thing as color 3D printing I knew I was going to give it a try. I dug out the old head files and managed to attach a base using ZBrush, found out how to convert the files for color 3D print and set it off. I had no idea how addicted I would become!

Q: How did 3D printer affect your creative activities?

Now my spare time is predominantly made up of working on something or other 3D print related, and I’m planning to rebalance my life a bit so I’ll be able to spend more time working on some of the ideas that 3D printing has inspired. 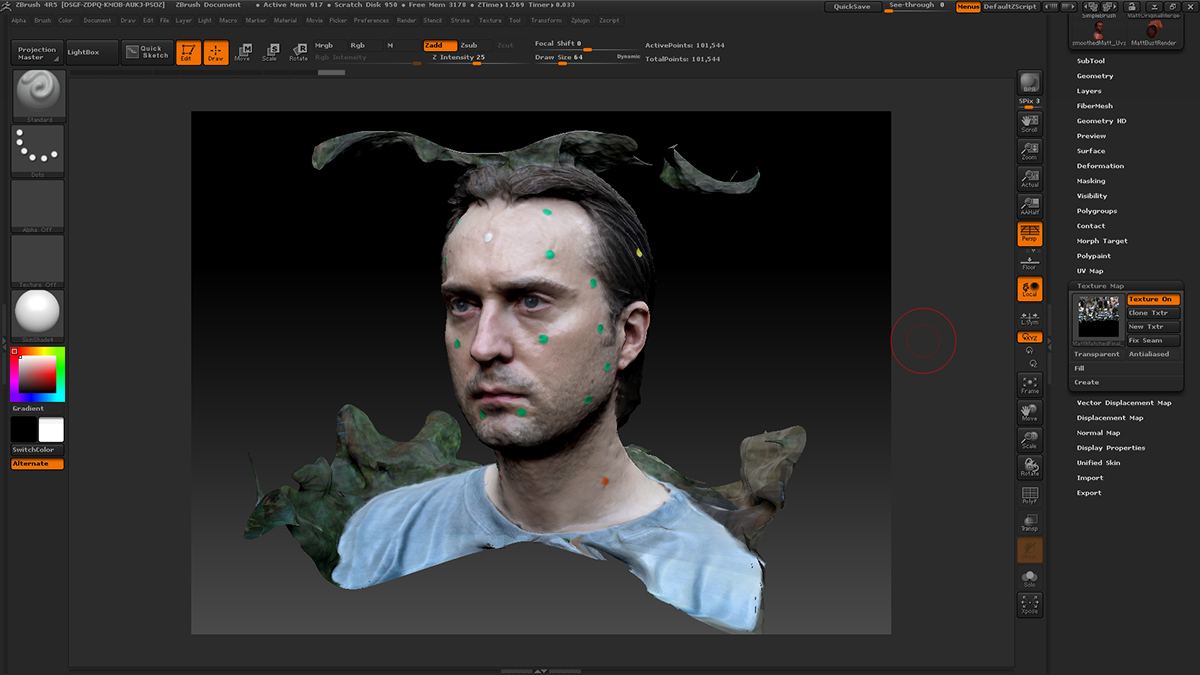 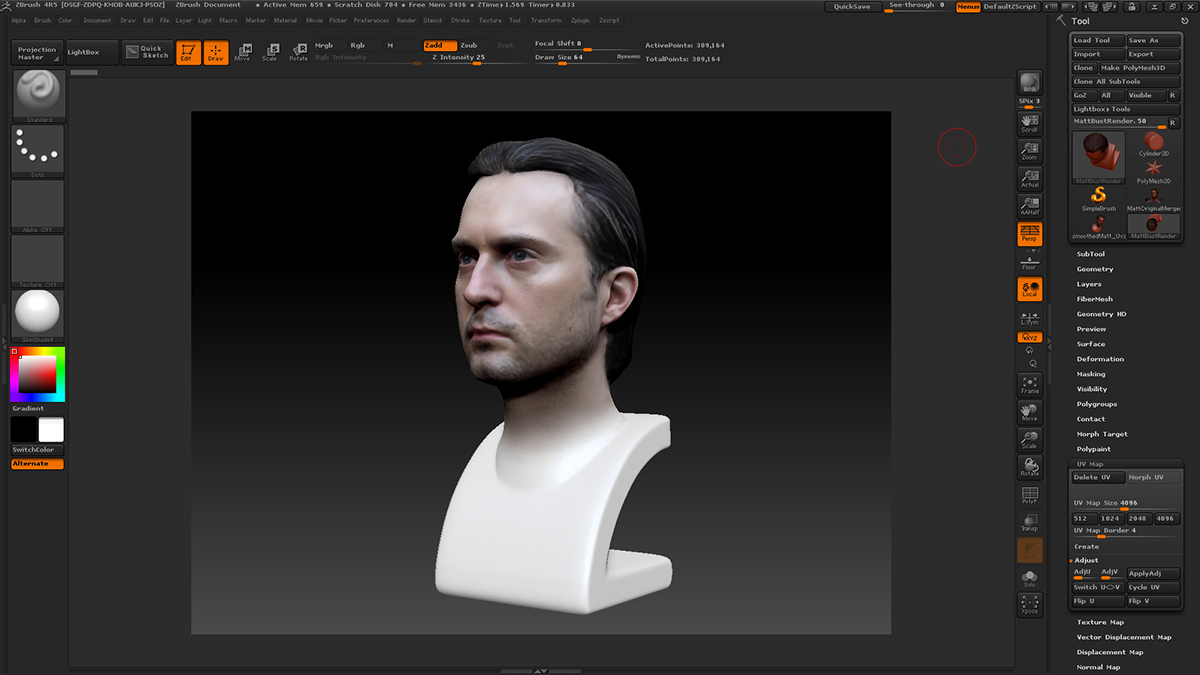 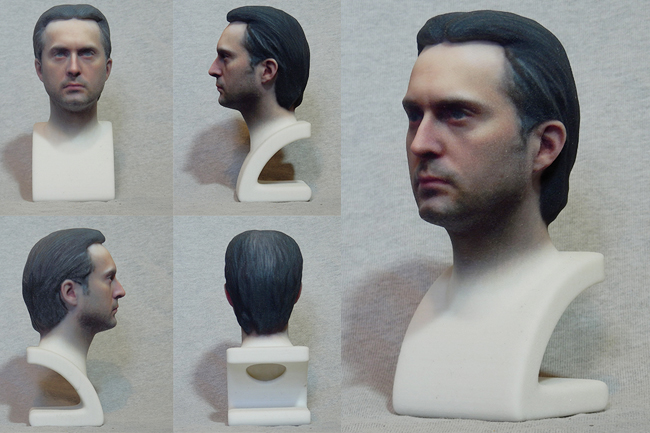 Q: How do you feel frankly when the characters have been formed by a 3D printer?

It’s always exciting and amazing to get something tangible from pixels. You always pretty much know what it’s going to look like, but the addition of real light and the surface of the materials literally bring a whole new dimension to your art. People respond so much better to a 3D print than they do to an image of the same character. It makes it more real, it’s like liberating the characters from their 2D pixel prisons.


Q: On occasion of remodeling video game characters for a 3D printer, what should be taken care of, which you found the first time you did that.

Video game characters are modeled very efficiently. That means often you won’t get closed meshes and you’ll inevitably find detail that is too fine for the printers or a texture for details that you’ll want to remodel. The few times I’ve worked on preparing our game models for print I’ve found there’s a lot of cleanup to do: to the extent of almost remodeling the character from scratch. If you’re lucky there may be a high-resolution production model of the character you can make use, but the chances are even then there will be a lot of cleanup required before you can get a good print. You’ll also need to pose the character well, they usually come in a variation of the Davinci pose which isn’t too dynamic, so be prepared not only to spend a lot of time cleaning up the character but a heap more posing them. 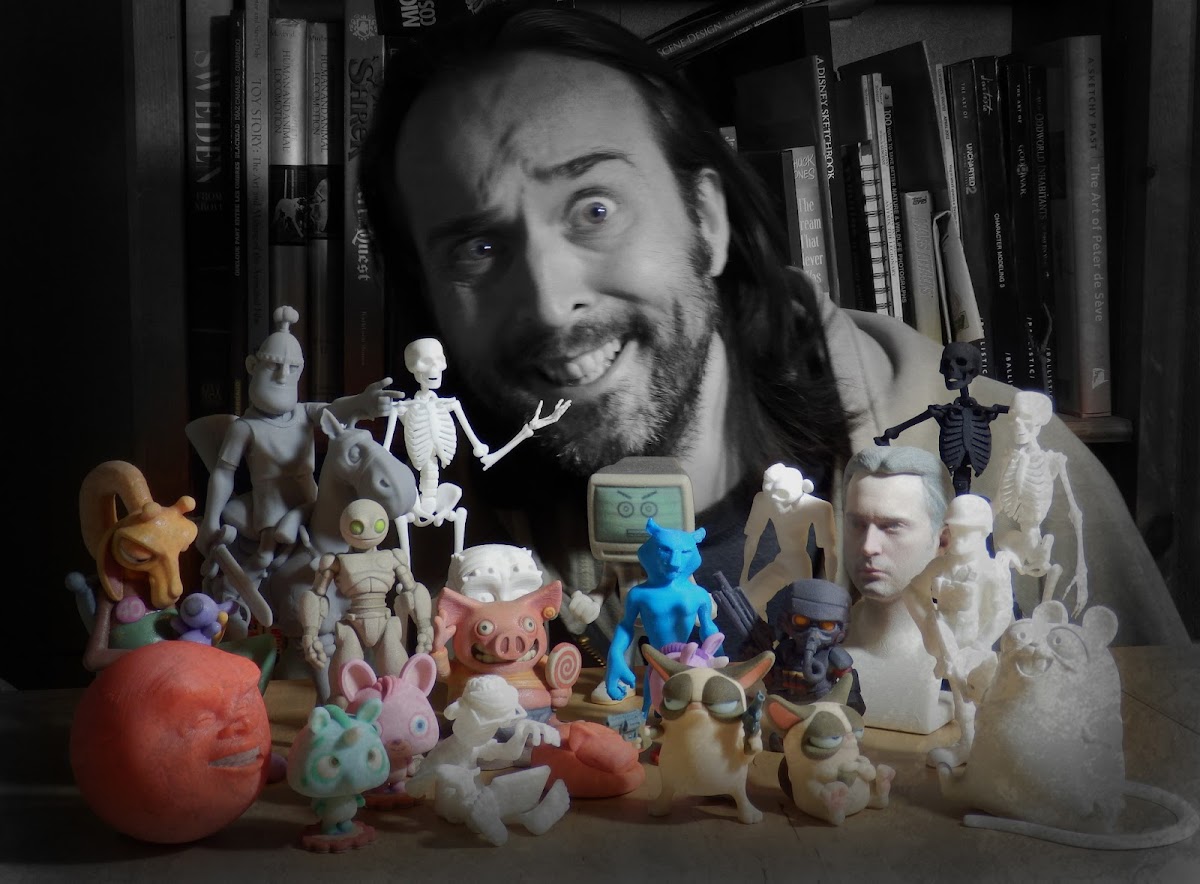 
Q: Please let me know what you want to make next.

I’m currently working on a little art piece that uses mixed media but relies heavily on 3D printing at its core. I don’t want to say too much, but it’s a little different from my current 3D print portfolio- it has a fantasy angle; but is a bit harder edged. I also plan to develop my skeletons to include accessories and possibly some animals; I’m also really interested in automatons so something along those lines makes the list, and a 3D zoetrope to mix some of my animation ability with the 3D print process . . . need . . more . . . time!


Q: Which software are you using?

At home I predominantly use ZBrush, just got V4r7 of that. I use Maya at work- version 2014I also use Photoshop.


I’d recommend ZBrush to anyone who is interested in creating art for 3D print; it takes a while to learn but is so versatile and very 3D printing friendly. I find the optimizing, resurfacing and export tool invaluable. It’s also at the more affordable end of 3D software.